Trending
You are at:Home»Entertainment»Audrey Hepburn stars in ‘How to Steal a Million’ on Blu-ray

Peter O’Toole joins Audrey Hepburn in the 1966 romantic comedy “How to Steal a Million.” The plot is entertaining, and the actors are enticing in their roles. John Williams (known as Johnny Williams in his early days) created a nice score for the background.

Nicole (Hepburn) lives with her father DeSolnay (Charles Boyer) in Paris. He excels in forgery, recreating famous paintings. His father was also an art forger, however he recreated sculptures.

DeSolnay loves recognition and loans his prized Cellini Venus sculpture to the Paris museum. When Nicole learns it was one of her grandfather’s creations, she panics, which grows when she learns the museum is going to conduct the usual tests to prove it is a genuine Cellini. If they discover it is a fake, the family secret will be revealed.

Nicole enlists the help of a burglar, Simon Demott (O’Toole), to steal the sculpture before any tests are conducted. With the security the museum has in place, which will be quite a challenge. The intricate scheme Simon and Nicole pull off is a fun caper.

Amid a fun plot, Hepburn stands out with her fabulous Givenchy wardrobe. This woman was the epitome of style and grace in her career. She brought all her comedic chops to the role of Nicole, while at the same time looking like she stepped out of a fashion magazine. Even in a cleaning woman’s outfit, Hepburn manages to look stylish.

This is definitely a fun film with plenty of adorable scenes. A bonus feature on this Twilight Time Blu-ray is a featurette about Audrey Hepburn.

Hepburn and O’Toole might not seem like the perfect romantic couple on screen, but they manage to pull it off well. This is a fun film with a cute story and plenty of comedy mixed with classic romance.

The actress was nominated for several awards and was presented posthumously with a humanitarian award by the Academy. She is still thought of as a style icon, and in her celebrated career created so many memorable characters on film, including Eliza Doolittle, Holly Golightly, Sabrina Fairchild, and others. 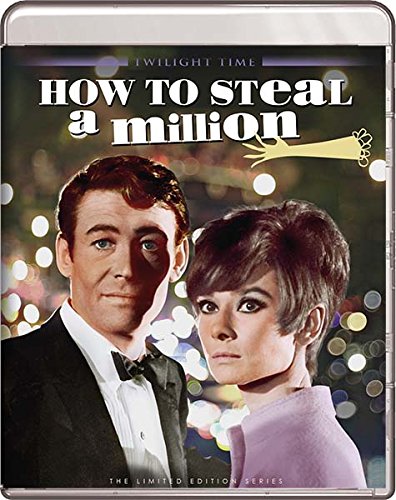 “How to Steal a Million” is now available on Blu-ray from Twilight Time.