A soldier. A singer. A fighter. A lover. What do they all have in common? They’re Elvis in the 1962 film “Kid Galahad.”

The story centers on Walter Gulick (Presley), a young man who was just discharged from the Army and is yearning to own his own garage. He’s a wiz at mechanics, but needs some money to help him realize his dream. When he returns to Cream Valley, the small town in which he was born, a cunning man who runs a boxing camp takes him under his wing. Willy Grogan (Gig Young) only thinks about himself and he is really a man without any appeal. His mind is only on the bottom line, in other words, how he can make money. He had not feelings for others.

Walter is a charming and respectful man and earns the name Galahad because he came to the aid of Willy’s girlfriend (Lola Albright). With the help of the camp’s trainer (Charles Bronson), Walter becomes the best boxer in the land. He really doesn’t want to box, but he will do it until he makes enough money to buy his garage.

In the meantime, Walter meets Rose (Joan Blackman), Willy’s sister. They are instantly attracted to each other and even though Willy disapproves, they continue to see each other.

So, there’s Walter, who’s only fighting until he makes enough money to fulfill his dream. There’s Rose who is falling in love with him. There’s Dolly, Willy’s girlfriend he has been stringing along for three years. And there’s Willy, the low-life who doesn’t seem to have anyone’s good will in mind except his own. And the mob is out to make money off of Willy who has managed to get himself in deep trouble with the bosses. Now mix that with Elvis’s songs and you have a simple, tuneful, simple little story that is typical Elvis Presley. 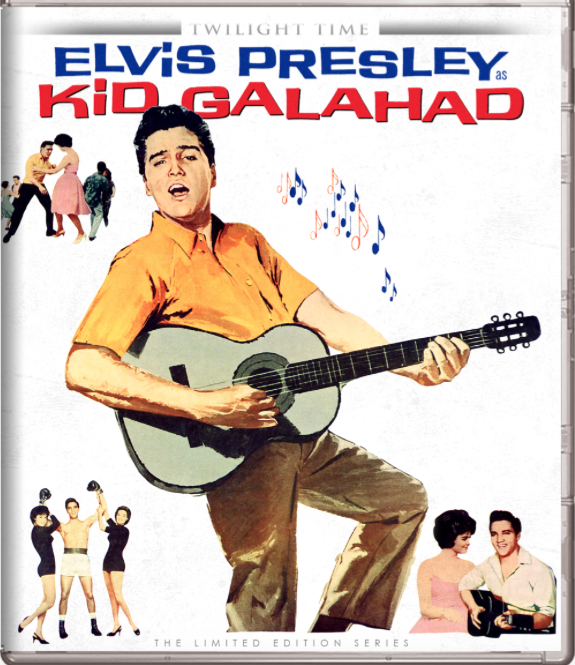 If you’re an Elvis fan, then you’ll definitely enjoy “Kid Galahad.” The new Twilight Time Blu-ray edition includes a booklet about the film, which is described as a “warm, genial, corny slice of Americana with considerable charm.”