Trending
You are at:Home»Entertainment»Movie Reviews»‘Hell and High Water’ on Blu-ray

Twilight Time has just released the 1964 film “Hell and High Water” on Blu-ray. Richard Widmark stars as a former World War II Navy captain who is tasked with taking a submarine to the northern Pacific to stop what could be the start of World War III.

Keep in mind that this was produced during the height of the Cold War, but even in today’s tense times, the subject of nuclear bombs still raises fears around the globe.

The story is interesting. The world’s top nuclear scientists have been disappearing and thought to have been taken by or defected to the USSR. But they have secretly been congregating in Japan where they have discovered the Chinese are about to explode a nuclear bomb somewhere in the Pacific. Before they can bring this to the world’s attention, they need to get proof that their theory is true.

Captain Jones (Widmark) leads his crew into dangerous territory, with two scientists on board the sub. Denise Montel (Bella Darvi) and Professor Montel (Victor Francen) are along to collect information about the nuclear activities taking place on a remote island. Once they get the facts, they will take their findings to the world for further action.

However once they have concluded their worst fears have been realized and the Chinese indeed are about to explode a nuclear bomb, everything changes. Jones discovers what the Chinese ultimately have in mind and that could be the end of civilization.

A bonus feature on the Blu-ray is a documentary about the life and career of Richard Widmark. Most people are unaware of his life. This is an enlightening documentary, with interviews with his daughter and others. It’s definitely something worth watching.

Widmark began his acting career bursting onto the scene (no pun intended) with his chilling performance of Tommy Udo in “Kiss of Death.” From there he was signed to do more films in which he played the heavy. After awhile the actor wanted to play other kinds of characters, and eventually he succeeded in showing the public what he was capable of. He had a long and prosperous career through the early 1990s. 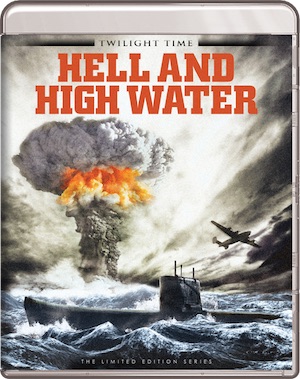 Unlike many of the actors of today, Widmark preferred to remain out of the spotlight when he wasn’t working. He loved spending time on his ranch with his family. He was definitely a family man and devoted to his wife.

Although he was nominated for an Academy Award for his performance in “Kiss of Death” Richard Widmark never received an Oscar.