Trending
You are at:Home»Entertainment»Hidden Figures on Blu-ray Combo Pack

Inspiring films are rare these days, however, Hidden Figures is one that inspires viewers and also educates as well as entertains. In a nutshell, it is the confluence of elements that come together in 1961: the space race, women in the workplace, and civil rights.

Katherine Johnson (Taraji P. Henson), Dorothy Vaughan (Octavia Spencer), and Mary Jackson (Janelle Monae) worked on the Virginia campus of NASA as computers, the term used to describe their positions. This was 1961, the time that pre-dated actual computers. These women were the ones who crunched the numbers. They were basically the same as the white male engineers, but due to the time in history, they were not considered as equals.

Johnson was a genius when it came to numbers. From the time she was a young girl, her math skills were what set her apart from everyone else. She was selected from the other “computers” to work with the actual engineers. While the all-white male office of engineers did not welcome her, being a woman and also being a black woman, her genius was quickly noticed. If it hadn’t been for Katherine Johnson, John Glenn probably wouldn’t have had his successful space flight and the United States might not have been able to get to the moon.

Jackson was another pioneer at NASA, trying to further her career as an engineer. But she needed certain classes in order to be considered for the job, and the only place where she could take the classes was an all white school. Undeterred, she set out to take this issue to court where she succeeded and ultimately broke the race barrier in the school.

When the IBM computer was installed, it was Vaughan who realized that people were going to be needed to work the machine. She studied hard and made her computer skills invaluable to the agency.

Bonus features on the Blu-ray are just as fascinating as the movie itself. As Costner states, this story was “buried in history.” Viewers also learn the history of NACA, which became NASA, and gain more insight into the women and the agency. The real Katherine Johnson comments about her experiences at NASA. Also, viewers learn how the movie came to be made. It was filmed in Georgia with a crew that was 33 percent women. That was a change from films today that use about 20 percent women on the crews. Deleted scenes round out the additional features.

Hidden Figures is a wonderful film for everyone and a great history lesson. The movie was nominated for three Academy Awards and the performances are top notch. 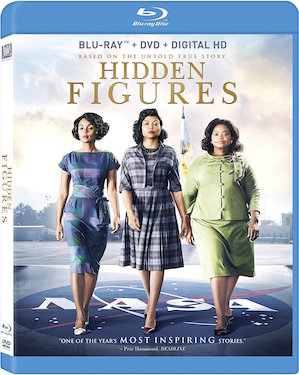