Trending
You are at:Home»Entertainment»Book Reviews»Mission: Jimmy Stewart and the Fight for Europe – Book Review

Mission: Jimmy Stewart and the Fight for Europe is a fascinating look at the Hollywood star. The book begins with Stewart’s early years as a rising actor who shared an apartment with his friend Henry Fonda in NYC. Soon both actors were sharing a place in Hollywood as their rise to stardom loomed and they played around the Hollywood scene. The carefree life of a young actor was a freeing time for them both.

Jimmy Stewart had a love of flying and began taking lessons. With the war looming, he decided he would be best suited for the Army Air Corps. He spent his spare hours in the air building up his time. When it became time to join, Jimmy Stewart was up against several problems. First, he was rejected because he was underweight, then he had problems with MGM who held his contract. They didn’t want anything happening to their money making star. Jimmy Stewart had to confront both his stardom and his bosses at MGM several times but he eventually won out and got his way, rising up the ranks from private to colonel and flying dangerous missions over Germany.

Stewart was stressed over not only his own missions, but also those of the men under his command. He couldn’t eat and relied on ice cream and peanut butter. As the war raged on and many of his men were killed or taken prisoners, Stewart aged. He became even thinner than he had been and his hair grayed. He aged tremendously in the years he was over in Europe.

After returning to Hollywood, Stewart teamed up with his friend Frank Capra for another Stewart/Capra hit, It’s a Wonderful Life. In this film, the first after the war for both the star and the director, the character of George Bailey discovered life is worth living. After floundering since returning from the war and trying to wrap his head around what he experienced, Stewart felt a lot like his character. It’s a Wonderful Life brought him back to the world, in a way. Today we would say he experienced PTSD, but that was not even thought of in those days. He never got over what he went through in the war, but he once again became a beloved movie star.

This is a fascinating look at the man who was not only a great actor, but also a true American hero. The author, Robert Matzen, did a tremendous amount of research while writing this book. He interviewed several aviators who had flown with Stewart, read the actor’s Air Force personnel files, and visited the James Stewart Papers at Brigham Young University. The book provides a well-rounded account of the man who was a great actor and a great American. 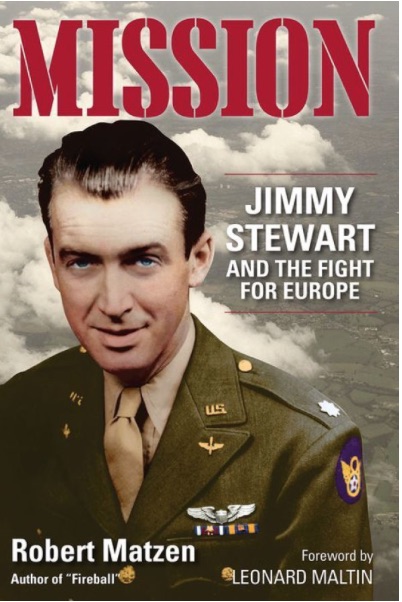