Trending
You are at:Home»Entertainment»Rogue One: A Star Wars Story – Movie Review

Rogue One: A Star Wars Story is publicized as a stand-alone movie, however it definitely fills in a chapter of the Star Wars sage. Did you ever wonder in the initial Star Wars film that came out in 1977, how the rebel alliance got their hands on the plans for the Death Star? Well, if that question ever crossed your mind, then you will have it answered in this new film.

While Rogue One can be a stand-alone film, it does connect aspects of the franchise, however it is not until the last third of the film when viewers see many familiar faces. The visual effects are what guide the film as the characters move from one dangerous situation to another while defining the base between the alliance and the empire.

The story centers around Jyn Erso (Felicity Jones) whose father Galen (Mads Mikkelsen) was taken by the empire to plan and build the Death Star. Jyn was just a little girl at the time and was left to grow up alone on the fringe of society. Galen was not a fan of the Empire but knew he had no choice. He knew if he didn’t go with the Empire, his family would be killed.

Jyn aligns herself with the rebels and through a holographic message learns what she must do to stop the Death Star.

She is joined by Cassian Andor (Diego Luna) and several others, including K-250, a droid who speaks his mind. He kind of reminds me of The Big Bang’s, Sheldon Cooper.

If you aren’t into Star Wars, you most likely will not be entertained by this film. However if you are an avid Star Wars fan, then by all means this will entertain you and add a little more background to the story.

As with the other Star Wars films, the female characters are strong. “We talked about the fact that Jyn isn’t just a woman—she’s a person,” Director Gareth Edwards explains. “She just happens to be female. We always tried to treat her like that. I wanted to make a character that I would want to be. Not to fancy her or want to marry her, but want to be her. It was just a cool person. We tried to make the film in such a way where the issue of boy or girl never came into it.”

There are more Star Wars films in the works. These stand-alone style films add pieces to the ultimate puzzle and can be out of context from the saga. Producer Kathleen Kennedy said, “the great thing about the filmmakers we’re bringing in, is they’re all fans. They all have a deep, emotional connection to Star Wars. That’s something that’s really important as we look around and identify the people who will direct these films. We’re looking for caretakers—people who genuinely care and accept a responsibility around the franchise.”

Rogue One: A Star Wars Story is one special effect after another and adds just one more element of the story of the galaxy far, far away. 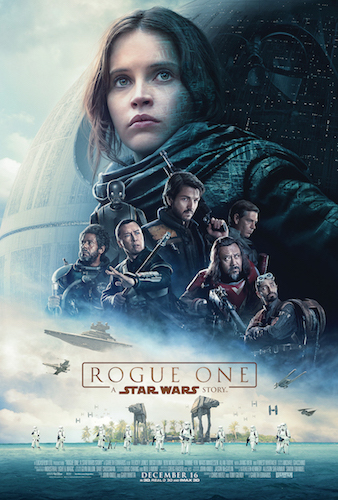