Trending
You are at:Home»Entertainment»Movie Reviews»‘USS Indianapolis: Men of Courage’ on Blu-ray and DVD

Usually, the Indianapolis had an escort to guard against Japanese submarine attacks, but on this special mission things were different. They were on a top-secret mission and no one else was privy to that so the ship was on its own from San Francisco to Pearl Harbor to Tinian, where it delivered the atomic bomb “Little Boy” that was dropped on Hiroshima.

After successfully delivering their packages the ship left Tinian, again without an escort. They were still in a top-secret mission so in effect, they were not even there. No one was to know about their location or their mission. Alone on the high seas they were again attacked by a Japanese submarine. This time the torpedoes were fatal for the ship. The Indianapolis was sinking, so McVay ordered everyone to abandon ship.

The men were soon in the oily water surrounded by sharks. With a few lifeboats to keep them relatively safe, their numbers quickly shrank as the sharks fed on the bodies. With no fresh water and very little food, this was not the ideal situation for anyone, let alone a crew who were part of a top-secret mission.

After being torpedoed, about 900 of the 1,197 men on board made it off the ship into the ocean. Twelve minutes later the ship sank and those left in the water were freezing, hungry, thirsty, and, quite simply, shark bait. Only 316 were ultimately rescued.

There is a “Making Of” bonus feature in which the filmmakers and actors discuss the events both making the film and the events that inspired the movie. They portrayed “real people,” their mission, and their subsequent near-death experiences didn’t get them the recognition they deserved. The film shows the facts of this “unique” and “important” story, as they say. Much research went into getting the story as authentic as possible with great attention to detail.

They filmed the ocean scenes first and they really filmed in the ocean. This experience served to bond the actors and they spent plenty of time off-set together to make sure they were very familiar with each other, as the real sailors had been.

USS Indianapolis: Men of Courage is an absorbing look at this little-known event in US history. It is rated R for war-related images and brief language and is available on DVD and Blu-ray. 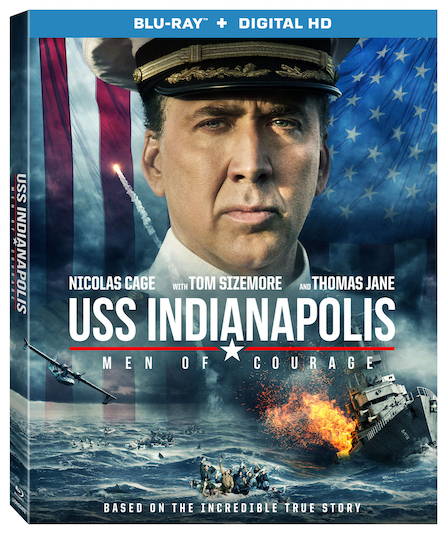